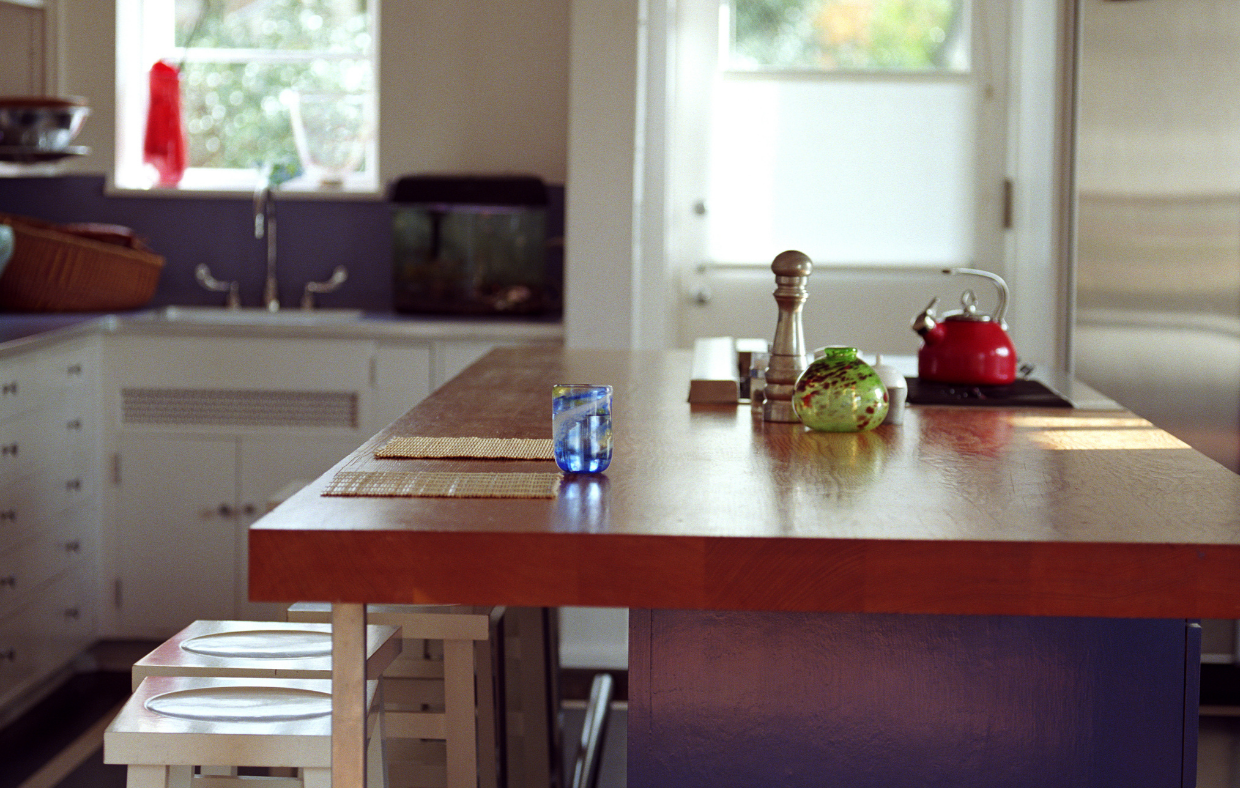 You can ask your architect to include a compact built-in kitchen island that doubles as additional storage space as well. The square footage can be adjusted based on the space available. This kitchen island by HA Architecture adds a butcher block topper for food preparations and is painted complementary to the entire kitchen. The base serves as cabinets for storage, and a step ladder and kitchen rail are added to the sides.

Take this narrow, marble kitchen island that the Heidi Caillier Interior design team placed in this Tudor home. It perfectly matches the brick floor, marble backsplash, and sandstone countertops. This kitchen island is mobile so that you can move it to the party area during gatherings.

This kitchen island doubles as a home bar. It has a mini-refrigerator and wine bottle storage. Isn’t it amazing? You get a kitchen island, and a home bar rolled into one!

You can also add a small stainless steel chef table to your kitchen. If you think it would complement your kitchen interiors, then get one for only around $100.

You can redecorate your kitchen and add up a two-tier kitchen island. It provides extra space for cooking and can be a place to eat meals, too.

You can make your own kitchen island, too! If there’s a cabinet hanging around your house that can be transformed into a kitchen island, then it’s time to squeeze in those creative juices. Who knows, you might end up having this wonderful farmhouse-inspired kitchen island. You add the beadboard and refurbish it a bit to function as a storage space too.

How about we turn a bookshelf into a kitchen island? It is possible! Courtney, the DIYer behind Golden Boys and Me, turned three IKEA Billy bookcases into a kitchen island. She combined the three, transformed the space for the book into a room for spices and kitchen utensils, then added a butcher block on top! What a fantastic transformation.

If it’s not a cabinet space, then a trash bin is a good idea! This hack is made by blogger Sawdust 2 Stitches, where she transformed two cabinets into a small kitchen island with trash bins inside. This is very practical and convenient. You can immediately take care of your biodegradables by shooting them directly into the trash bin. Don’t forget to place a butcher block on top! You can also free up space once occupied by your trash bin.

Kitchen updates can be expensive, costing around $23,000 to $35,000. Still, these small kitchen island ideas will give you some life hacks on adding value, functionality, and aesthetics into your kitchen without hurting the bank!